Google Chrome, Mozilla Firefox and Microsoft Edge are the popular and widely used browsers among computers and mobile devices. And Google Chrome definitely dominates in terms of the market share, but the Firefox and Microsoft edge are also getting stronger to compete for the users, especially the Microsoft recently released its new edge chromium browser for Windows 10. As the war among web browsers getting fierce, let's have a look at the differences between the new Microsoft edge (chromium), Google Chrome and Mozilla Firefox browsers.

Google Chrome and Firefox are the mature browsers in the market, both of them support Windows, Linux, macOS and iOS. The new Microsoft edge can be installed by default on Windows devices but also available for macOS, iOS, and Android. Therefore, on this point, the three browsers are nearly on the same level.

A simple and concise page will make users feel comfortable. So the first comparison part among new Chromium edge, Google Chrome and Firefox is the browser appearance. In this part, the following point will be discussed. 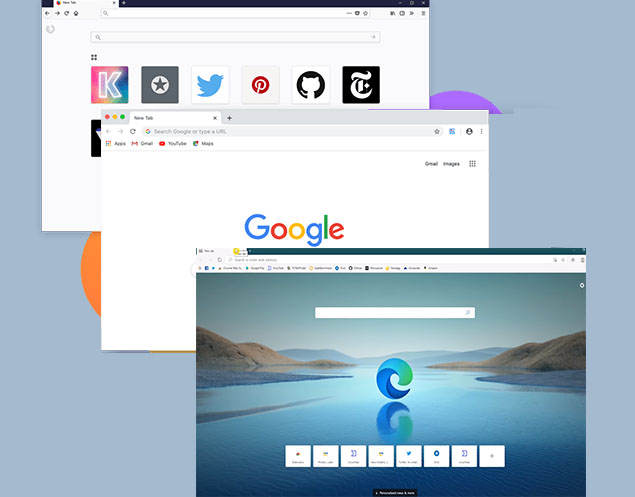 Home Page: most of us are familiar with the home page of Google Chrome and Firefox, both of them are simple and much similar to each other. For me, the tab bar of Google Chrome is more suitable and comfortable than Firefox. And you can access to Google services like gmail if you have a Google account. The new Microsoft edge has the same tab page of the original browser but it was tweaked to be a litter better, and you can customize it as the way you like by adding a Google page to be the start page.

Setting Menu: on this point, the three web browsers are very similar. The setting menu is on the right upper corner. But their focus is a litter different. Firefox put the security and privacy in the first place, while the chromium edge and Google Chrome seem to pay more attention to user experiences. but whatever, the three nearly offer the same options for users they need on the whole.

Extensions and app: extensions allow users to install add-ons that bring more features. You can add extensions from the Chrome web store in the Chrome browser, and get add-ons from the addons.mozilla.org in the Firefox browser, therefore in terms of the extension diversity, Google Chrome is better than the Firefox. While Microsoft Edge chromium enables users to add extensions from Microsoft Store, Google page and Google Store, which makes it the best one among the three web browsers. Besides, in the new Windows edge, you can add a web page as an app, an open it directly and quickly next time. For example, you can add Twitter, Facebook, and Instagram in the app option, which the Chrome and Firefox do not support.

Security: Firefox always claims it can block over 2000 trackers for one user. Firefox comes with a built-in pop-up blocker, but no ad-block. And it uses Google’s safe browsing database to protect users against websites with known malicious content. When you’re opening a website through an unsecured (non-HTTPS) connection, Firefox warns you, but the warning is pretty small and easy to miss because it doesn’t contain any text. Google Chrome has a built-in pop-up blocker and plenty of third-party ad-blockers available in the Chrome Webstore, and it also uses Google Safe Browsing to block malicious websites. When you use Chrome, the warning you get to connect to a website over a regular HTTP connection is clear and easy to notice. Compared with Chrome and Firefox, new Microsoft Edge offers more simple operations on security settings. There are three levels of tracking prevention. Three options you can choose from to break a website, which is different from Google Chrome. The basic level allows most trackers and blocks those that Microsoft knows to be harmful. If you choose the stricter one, it will give you the most privacy blocking, and some websites maybe unavailable. So just tweak with what you want.

Upgrade for Windows 7/8 and Mac: Google Chrome and Firefox will inform users of the new version, and the Firefox browser receives frequent updates that download automatically. The Chrome browser receives frequent updates, usually every few days, which installs without requiring user action. The new Microsoft edge can update itself like Google Chrome and Firefox, and Microsoft said the edge will update every six weeks. But for the first time, if you install the new Microsoft edge chromium on Windows 10, it will replace the old edge and adjust all the logos on your desktop. But on Windows 7, Windows 8 and macOS, the new edge won't replace your configurations. On Android and iOS, the new Edge will replace old Edge automatically.

Other features: different from Chrome and Firefox, the Windows chromium edge is a new version browser, so here are some small features that many users may like.

The loading speed is a key factor to measure the performance of a web browser. And if you search on Google or YouTube, you will find a lot of tests that compare the speed of Windows new edge, Google Chrome and Firefox. Based on mine and other users' experience feedback, the new Microsoft Edge is much faster than the old edge. But the browsing speed differs when you open different pages like a text one, a video page or a mixed one. Here is the speed test result, you can take a reference. The browsing speed can be influenced by the Internet speed and computer performance.

Microsoft Edge vs Google Chrome vs Firefox: Will They Become More Alike in the Future?

The answer is definitely yes, especially the Windows Edge and Chrome. Microsoft is going to build the new Microsoft edge based on Chrome, which means the key elements like the rendering engine will be identical to Chrome. But the connected services are still different. For instance, you still need to use your Microsoft account, instead of a Google account, to sync your bookmarks and other personal configurations, and Bing will likely be the default search engine for Microsoft Edge. Many of the differences discussed above the Chrome, Windows Edge and Firefox, but some of them will disappear gradually.